Naomi Kashiwagi is an award-winning artist based in Manchester and has shown work across the UK and internationally. Kashiwagi produces works on paper, installations, performances and sound works that draw upon her cultural heritage, an intrinsic fusion of two cultures, English and Japanese. Drawing is central to Kashiwagi’s practice and she makes drawings using a range of media including diamonds, typewriters, gramophones and pianos, as well as graphite and pen.  Kashiwagi won both Arts Council North West prize, art08 Individual Artist Award and Best of Manchester Award (Art) in 2008. In 2013 she was shortlisted for the Women in the Arts Award; part of Manchester’s International Women’s Day Celebrations and was shortlisted for the Nationwide Mercury Prize Art competition in 2005.

As an artist, STEM concepts weave their way through my practice, whether it’s coaxing inherent electronic sounding drum ‘n’ bass beats, ambient techno loops or wobbulating whirs from playing re-appropriated 80 year old shellac records on a mechanical wind-up gramophone or using diamond and graphite to create Carbon Paper drawings. I have also composed a synthesised music and text score for typewriters, ||: Repetition :||, Fugue No.1 in QWERTY for 8 Typewriters that has been interpreted and performed by pianists and percussionists in an art gallery and made alternative record styluses from museum conservation materials (including using algae to make algaerhythms) for site specific performances.

When I was invited to present at Ada Lovelace Day- Live! at the Royal Institution, I thought it would be an exciting and inquisitive opportunity to research into, produce and perform something new that’s site specific, draws upon the work of Ada Lovelace and illuminates the relationship between STEM subjects and the arts for the event. For Ada Lovelace Day- Live! my presentation will aim to illuminate how I have curiously made these connections and I will present Gramophonica (Lovelace Remix)- Live!

Over the past five years my Gramophonica performances have developed through playful and conceptual experimentation, collaborations and commissions. Gramophonica involves live gramophone glitching by playing 78rpm records that have been re-appropriated with electrical tape on a wind-up gramophone. The tape adds an additional tactile layer that in turn creates unexpected percussive discordances, harmonies and manually maintained locked grooves when played, as the steel needle staggers or glides across the discreetly undulating strips of electrical tape. Gramophonica shows the potential to transform sounds from a specific era to sounds that sound post contemporaneous, like Detroit house music or ambient techno. 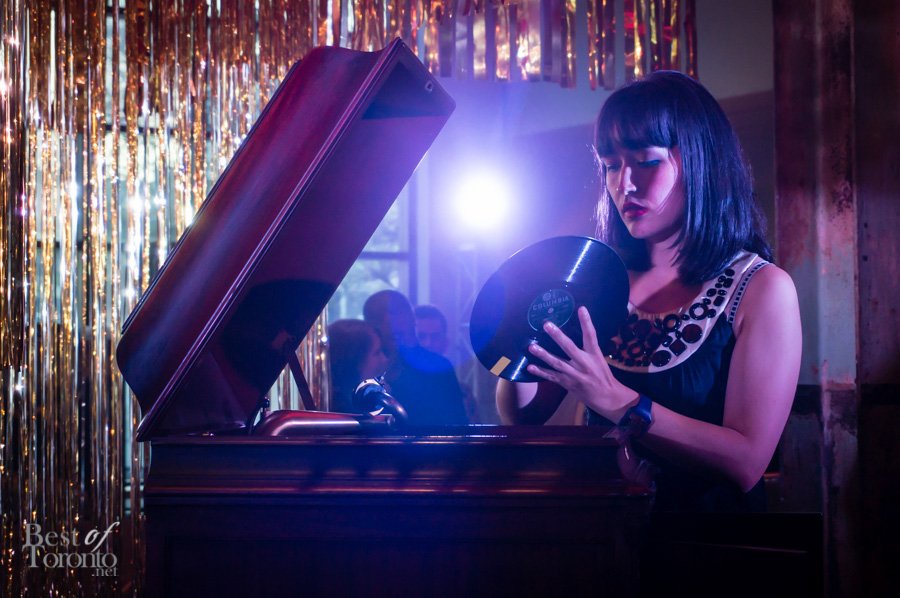 Other methods I have used to re-appropriate records include painting records gold, to be played and viewed by candlelight and making multiple record styluses from folded plastic acetate cylinders. I have collaborated with a Warehouse Project DJ and a Super Furry Animal and have been commissioned to produce new sound works for Soundworks (ICA,) Pankhurst in the Park, (highlighting the connection between Emmeline Pankhurst, leader of the British suffragette movement and Alexandra Park, Manchester) and Delia Derbyshire Day 2013 (celebrating the life and work of electronic music pioneer, Delia Derbyshire)

Come to Ada Lovelace Day- Live! to hear Gramophonica (Lovelace Remix)- Live! and tune into the sounds that conservation and archival materials from the Royal Institution can emit when cranked up on a gramophone and how I have been influenced by this poetic quote:

To find out more about Ada Lovelace Day, the international celebration of women in STEM, visit https://findingada.com